As with many devices, today’s shotgun microphone wasn’t a single invention, but was rather the cumulative result of several innovations over time. Four of these innovations stand out in the history of the shotgun microphone: Mason’s and Marshall’s Tubular Directional Microphone, Olson’s electroacoustical apparatus, Sennheiser’s MD 82, and Beaverson’s and Ramsey’s unidirectional microphone. If you’re a microphone geek like me, it’s interesting to trace the development of the modern shotgun microphone through these three seminal inventions.

What exactly is a shotgun microphone?

Before you can trace something’s history, you have to first define exactly what that something is.

The first line microphone wasn’t the shotgun microphone; it was the clustered-tube “machine-gun” microphone.

The machine-gun microphone started out as a device called the “Acoustic Impedance Element”, which was invented by W. P. Mason of Bell Telephone Laboratories (U.S. patent 1,795,874, filed September 22, 1927 and issued March 10, 1931). Bell Telephone Laboratories (which was spun-off from Western Electric Corporation in 1925) was responsible for much of the world’s research in communications technology in early part of the twentieth century, and Warren Mason was one of the most prolific researchers at Bell Labs.

The purpose of Mason’s Acoustic Impedance Element was to provide a constant acoustic resistance over a wide frequency range. He achieved this using a cluster of tubes of varying length. There are many possible applications for such a device, but Mason’s 1,795,874 patent didn’t mention directional microphones as one of them.

However, despite the fact that his 1,795,874 patent didn’t mention it, Mason either already knew or quickly figured out that it could enable a new type of highly directional microphone.

And so, in 1937, Western Electric Corporation (which had first rights to Bell Labs’ inventions) introduced the E99098. The E99098 was essentially Mason’s clustered-tube Acoustic Impedance Element in the form of an attachment for the existing Western Electric 618A omnidirectional microphone. The 618A/E99098 was marketed as long-range directional microphone for the film industry. For obvious reasons, this microphone was soon nicknamed the “machine-gun microphone”:

As far as I can determine, the Western Electric 618A/E99098 was the first commercial line microphone.

Then, in 1939, Mason and R. N. Marshall authored a very interesting paper [1] referencing the Western Electric 618A/E99098, and discussing the theory and actual performance of this new type of directional microphone. Among other things, this paper provides formulas for calculating the directivity of such microphones, compares their performance to parabolic dishes, and discusses some real-world applications.

On December 17, 1940, Mason’s U.S. patent 2,225,312 issued. This patent (which was filed about the same time Mason’s and Marshall’s paper was published) disclosed an advanced form of machine-gun microphone in which the cross-sectional areas (in addition to the lengths) of the tubes were varied to further increase directivity. But as far as I know, such a microphone was never produced.

The next steps in the development of the line microphone were made by H. F. Olson, another amazingly prolific engineer/inventor—but at the RCA Victor Corporation, rather than at Bell Labs. These innovations were disclosed in Olson’s U.S. patent 2,228,886, which was filed on October 31, 1938 and issued on January 14, 1941.

Olson’s improvements to the machine-gun microphone

The embodiments shown in the first fourteen figures of Olson’s 2,228,886 patent were improvements to the machine-gun microphone.

His simplest solution was to back-load the microphone with a tube filled with damping material so that it would present the same acoustic impedance to the microphone as the machine-gun tube cluster:

Olson also described how a machine-gun microphone’s low-frequency response could be intentionally restricted by making the rear damping tube one-quarter wavelength long at the desired cut-off frequency. He would later build on this idea in perhaps his most significant line-microphone patent, but we’ll get to that later.

RCA did produce at least one version of Olson’s basic machine-gun microphone, the RCA High Sensitivity Varidirectional Microphone MI-10006-A, around 1960. A photo of, and specifications for, this mic can be found on page 18 of the fifth edition of the RCA Broadcast Equipment Catalog (1962), accessible at http://thehistoryofrecording.com/Literature/RCA/RCA-Broadcast-Equipment-Catalog-1962-5th-Edition.pdf.

It’s clear that the 10006-A used Olson’s tube cluster, but the type of microphone element isn’t obvious. But here are a few interesting specs from the above reference:

As far as I know, aside from the MI-100006-A and the previously-discussed Western Electric 618A/E99098, no other machine-gun type microphones were ever produced commercially in large numbers. However, the machine-gun mic has one potential performance benefit over the modern interference-tube microphone: in an interference tube, sound pressure admitted by one slot can escape from another slot before it reaches the microphone, but that isn’t an issue with the machine-gun mic.

On the other hand, a machine-gun mic is heavier, and more expensive to manufacture, than an interference-tube mic. And that’s probably why they’re considered obsolete.

If you don’t study Olson’s 2,228,886 patent carefully, you might miss the fact that he also invented the interference tube microphone. His Figs. 15 – 18 showed four versions of this:

As far as I know, these microphones were never commercially produced, but the acoustic principles that motivated Olson’s innovations have had a powerful influence on modern shotgun microphone design.

I can’t find a patent that covers it, but the Sennheiser MD 82, introduced in 1956, appears to be the first practical shotgun mic that doesn’t use a tube cluster. In fact, the history page at the website of Sennheiser Ltd. takes credit for MD 82 as the first shotgun microphone in commercial production.

I can’t find any details about the operation of the MD 82. However, instead of the slots in a modern interference tube, the MD 82 appears to have used an array of fins to admit off-axis sound. In effect, the space between each pair of fins functioned as a deep slot, and the slot depth was apparently chosen to resonate at a frequency which would improve the MD 82’s high-frequency response.

I also can’t find any confirmation of the type of microphone element used in the MD 82, but from photos on eBay it appears to be a pressure-type element which has an isotropic response. Therefore, like Olson’s version, the MD 82 provided minimal rejection of low-frequency sounds arriving from 180 degrees off-axis.

The BBC published a report [2] documenting their testing of the MD 82, and I discuss some of the test results on my detailed post on how shotgun microphones work.

Beaverson’s and Ramsey’s unidirectional microphone, aka the Electro-Voice Cardiline

The final major development leading up to the modern shotgun microphone seems to be the “Unidirectional Microphone” disclosed by Wayne A. Beaverson and Robert C. Ramsey in U.S. patent 3,095,484, filed on October 22, 1959 and issued on June 25, 1963. One of their key innovations was the use of a special cardioid microphone element to improve the low-frequency directivity. Thus, this device could be considered the direct ancestor of today’s shotgun mics, all of which combine an interference tube with some type of cardioid element.

The cardioid element disclosed by Beaverson and Ramsey was innovative in the sense that the acoustic path to the rear of the diaphragm functioned as a low-pass filter, with the cutoff frequency approximately equal to the critical frequency of the interference tube. Thus, the microphone element functioned as a cardioid microphone at low frequencies, but as an omnidirectional element at higher frequencies at which the interference tube became effective.

The patent was assigned to Electro-Voice, which produced a series of “Cardiline” shotgun microphones (the Electro-Voice EV642, 643, & 644) that were remarkably similar to the device shown in the patent drawings. Mitchell’s Microphones [3] discusses these microphones and provides some pics.

What’s happened in the sixty years since the Cardiline?

Of course, shotgun microphone design has advanced significantly since the introduction of the Cardiline in the early 1960’s, but not as quickly as in the preceding forty years.

During those early years, giants like Mason and Olson were making fundamental advances in acoustics, and the Beaverson and Ramsey hybrid cardioid/interference tube microphone was truly ingenious. Those were revolutionary developments.

However, I think we’re on the verge of another wave of major advances, thanks to Digital Signal Processing (DSP). There have already been two attempts to exploit DSP to improve shotgun microphone performance: the Audio-Technica AT895 (circa 2004, now discontinued) and the Schoeps SuperCMIT 2U (circa 2010, still in production). Both used/use DSP, along with additional microphone element(s), to provide significantly greater suppression of off-axis sound that is possible with a traditional shotgun microphone.

I’ll discuss the AT895 and the SuperCMIT in upcoming posts. For now, I’ll just say that both of these innovative microphones demonstrated that DSP can dramatically improve shotgun microphone performance, but were hampered by the limitations of then-available DSP technology. That’s no longer an issue, so I expect many more DSP-enhanced directional microphones in the near-future. 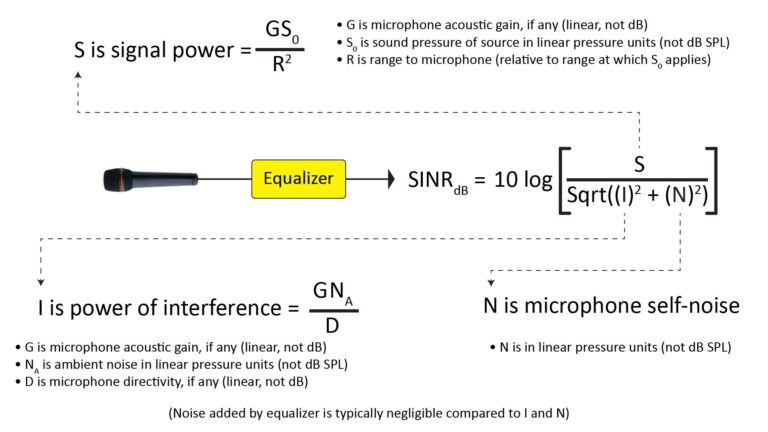 What is microphone SINR and how do you calculate it? Designing—and properly using—a microphone often calls for a way to predict microphone performance. This post introduces the most useful metric for that purpose: the Signal-to-Interference-plus-Noise… 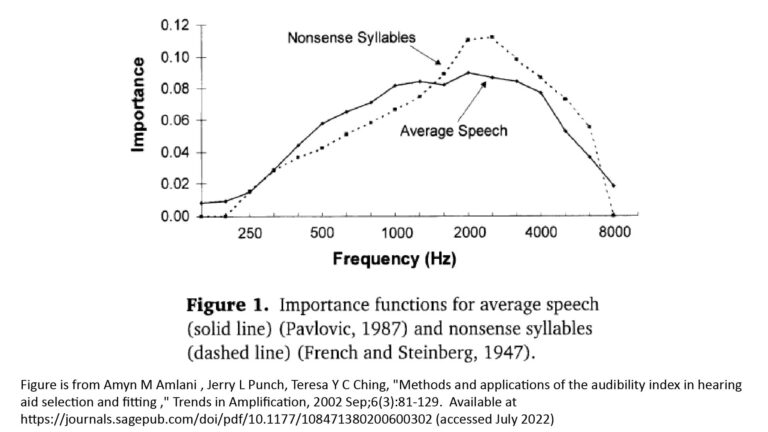 In Part 1 of this post, I introduced the Signal-to-Interference-plus-Noise Ratio (SINR), explained why it’s the key microphone performance metric, and described how to calculate it. In this Part 2, I’ll discuss three ways of… 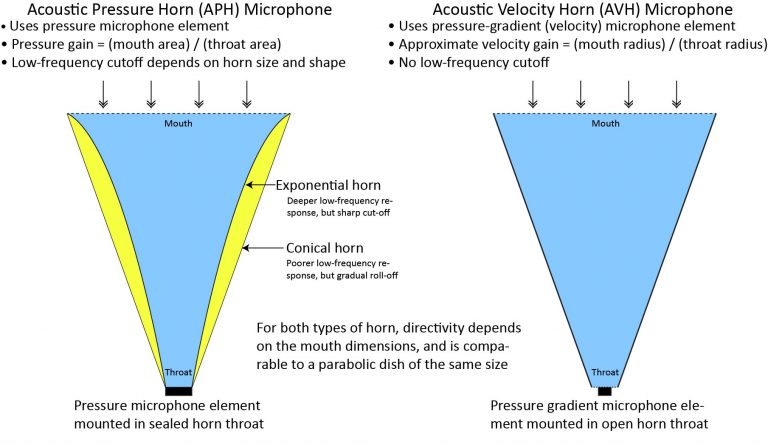 Not many people have ever heard of horn microphones (much less know how horn microphones work), but they’re potentially great alternatives to parabolic and shotgun microphones. They offer some unique performance advantages (but also have… 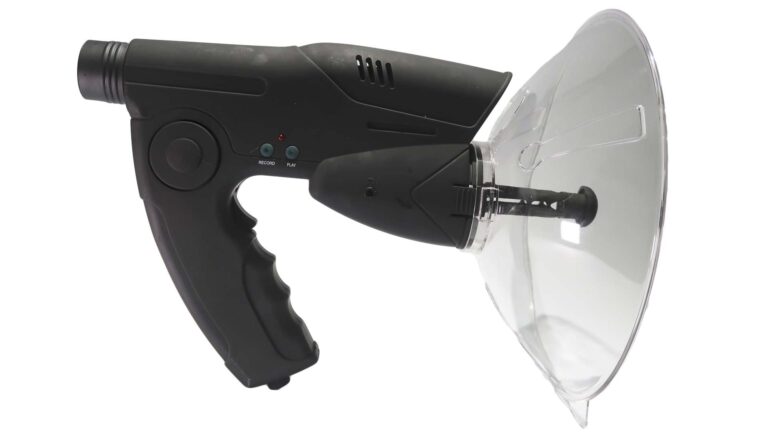 If you’ve looked for long-range listening devices on Amazon or eBay, you’ve no doubt come across a cool-looking small parabolic microphone for just 40 dollars. Often marketed under the Hausbell, Podoy, YaeTek, or other brand…

An array microphone, sometimes called a microphone array, consists of multiple microphone elements whose outputs are electronically processed to provide a greater Signal-to-Noise Ratio SNR) and a sharper polar pattern than the individual elements. There’s… 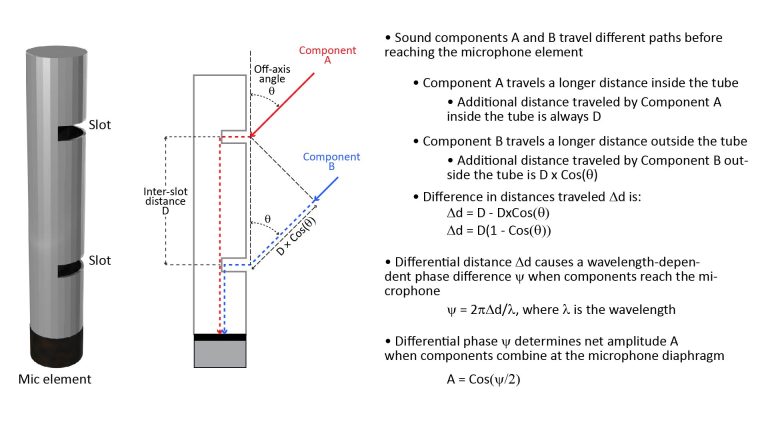